Given the geographical position, Arezzo has always been since ancient times a city open to trade and cultural exchanges. It takes place in the entrance of four valleys: Casentino north, west Valdarno, Valdichiana to the south-east and the Tiber valley to the east. Adjacent to the most direct and convenient corridor between the north and the center-south of Italy, such as Florence, Cortona, Chiusi, Orvieto, the Autostrada del Sole and the high-speed railway through the territory.
We know that as early as the sixth century BC, housed a primitive urban center mostly agricultural, of Etruscan origin. The center was located at the turn of the Colli di San Pietro and San Donato. The Etruscan town of Arezzo had its main cemetery on the hill of Poggio del Sole, but Etruscan tombs have also been found outside of the depression which now runs the railway line Rome-Milan, on an area bordered by the Avenue of Citizens and Via Piero della Francesca, this is the object of our studies: The Colle Pionta.
The Colle di Pionta is morphologically oval and stands at an altitude of m. 274. The land is made, at least on the surface, by tuff, a material very appropriate to house tombs and niches for burials. The distance between the foundations dell’altomedioevale Cathedral of St. Stephen and St. Mary in Pionta, reported recently in the light and the current Cathedral of Arezzo is about just over a kilometer. 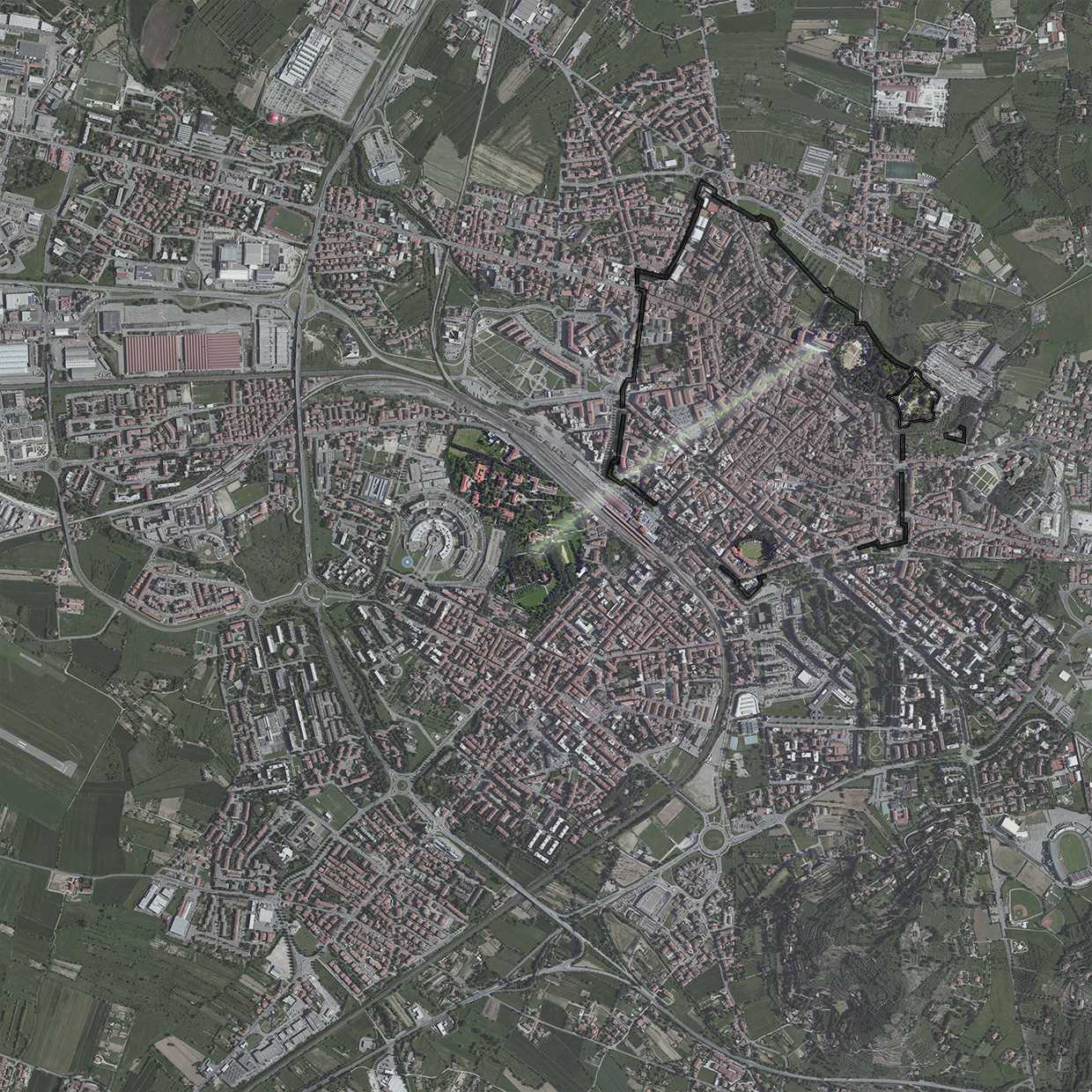 Geographical framework of Arezzo and the Hill of Pionta

The name Pionta and the “Old Cathedral“

The name “Pionta” has Lombard origins and comes from the Germanic “Biunda” which means “fence”. This word is the first reference name for our glues. Both Monsignor Tafi that Dr. Vaccaro Melucco agree in thinking about the “fence” is not like a fortified wall of a village but rather as a place fenced for cultivated land and farms. It was probably in the Carolingian period, with the consolidation of the power of counts of the bishops of Arezzo, the Pionta was endowed with walls fortificate1, although Tafi not totally rule out the presence of a wall fence at any time prior to enclose the tomb of San Donato, the early Christian cathedral, the bishop’s seat and the school of clerics.
The name Old Cathedral is due to the presence of the Temple of San Donato, the first Cathedral of Arezzo alone constituted a landmark for the entire area complete. After 1203, when the cathedral was transferred within the city walls, he continued to call ‘Domus’ headquarters Pionta, but with the addition of “vetus” Domus vetus, Duomo vecchio2.
From this we can deduce that the name “Pionta» has been since the Lombard name of the hill and that only at a later date, given the presence of the Duomo, the name was just replaced and Pionta remained to indicate some of the area Peripheral of the hill. Today, the name used for the area has returned to being “Colle Pionta” though, much of the population does not even know the history and origins of this great area of ​​the city that was home to the first cathedral in Arezzo. 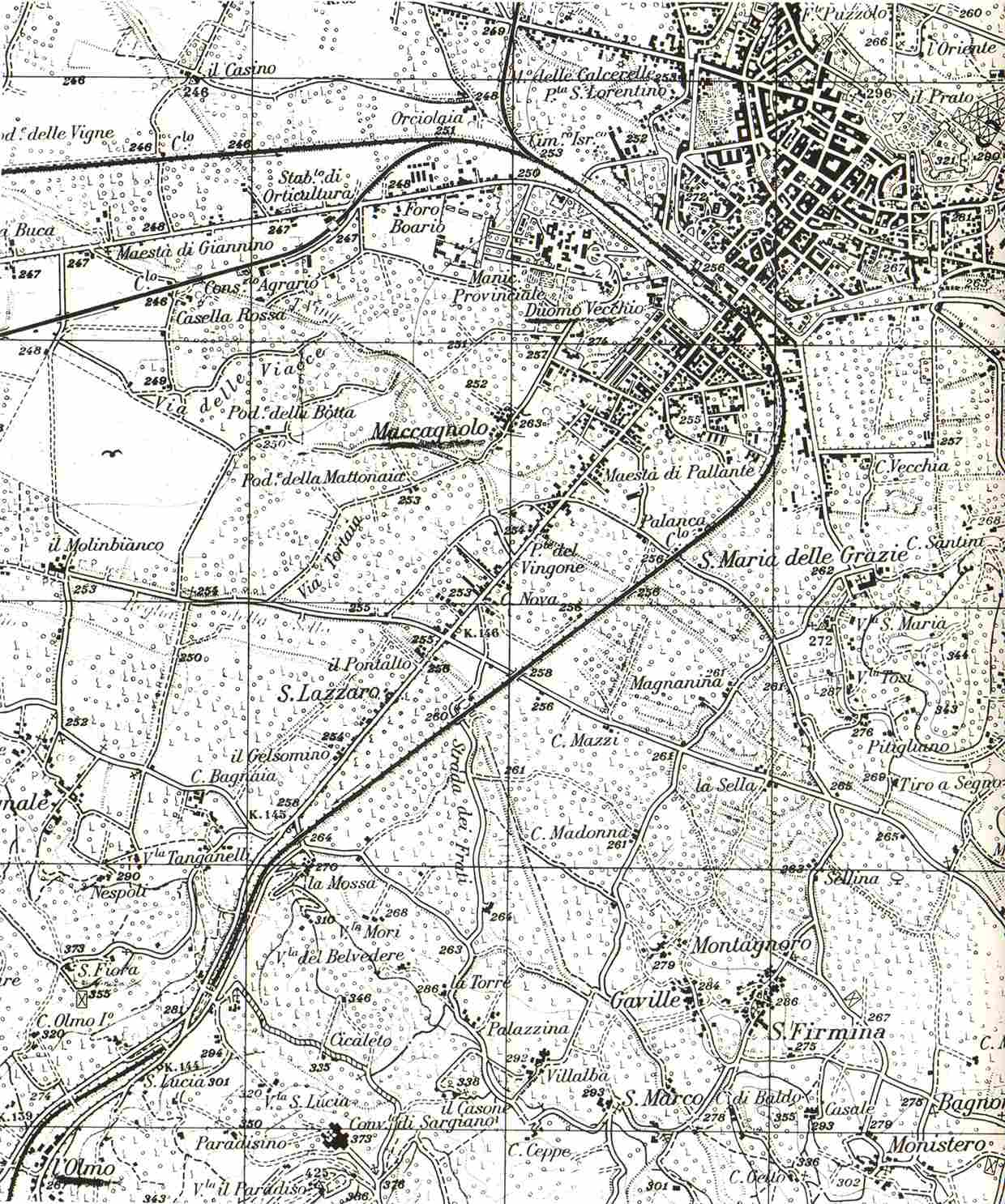 The Hill of Pionta today

From the sixteenth century the Hill Pionta progressively lose influence over Arezzo up to the archaeological excavations of the early twentieth century, demonstrating the renewed interest of the institutions and the population more sensitive to the rediscovery of a place full of history for the city.
Today Colle Pionta houses the eponymous park of 12 hectares, and is entirely defined by road routes: north from Viale L. Cittadini, north–east from Maginardo Avenue, to the east Via Masaccio, south of Via Curtatone and west from Via A. Vespucci that comprises Via Toscanelli (from the southwest) and Via di Pionta (from the west). From each of these pathways you can be accessed to the visit of the hill, on which displace several archaeological excavations, dating mainly to the 60 and 70 years when they finally rediscovered the first Christian and ecclesiastical center of the city of Arezzo. 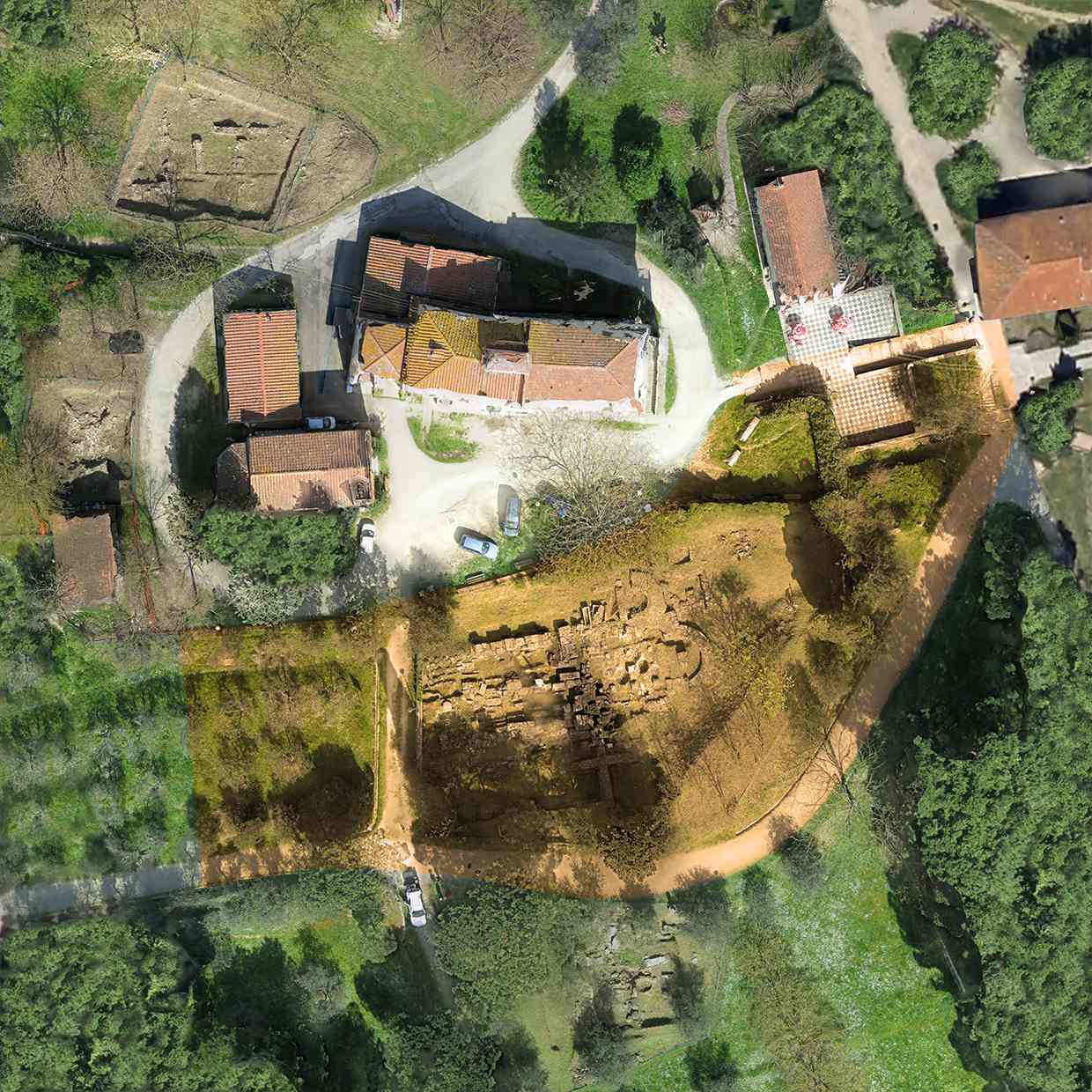 Orthophotos of Hill of Pionta and Area 1000

By accessing the Pionta through the oldest street, Via del Duomo Vecchio, we come to the bishop’s citadel, on the site where the object of this study, the views of the excavations. This area is the Oratory of St. Stephen, the archaeological site and the building of the cathedral, the seat of the former Cologne agricultural, then the former Neuropsychiatric Hospital, and today secured residence of former inmates.
The view that can be admired from the hill of Pionta is vast and impressive. From the north-eastern slopes (where they were the main monuments) offers a beautiful view of Arezzo and the highest point of the hill, the view extends to the mountains that surround the valley of Arezzo.
For if we stop to observe a geometric layout of Arezzo and surroundings, with elevations, starting from the top of the city consists of the hills of S. Pietro (m. 296, current Cathedral) and S. Donato (m. 321, Fortress Medici), with almost rhythmic scan we see a succession of hills already mentioned, that of Poggio del Sole (d. 272) and that of Pionta (m. 274). 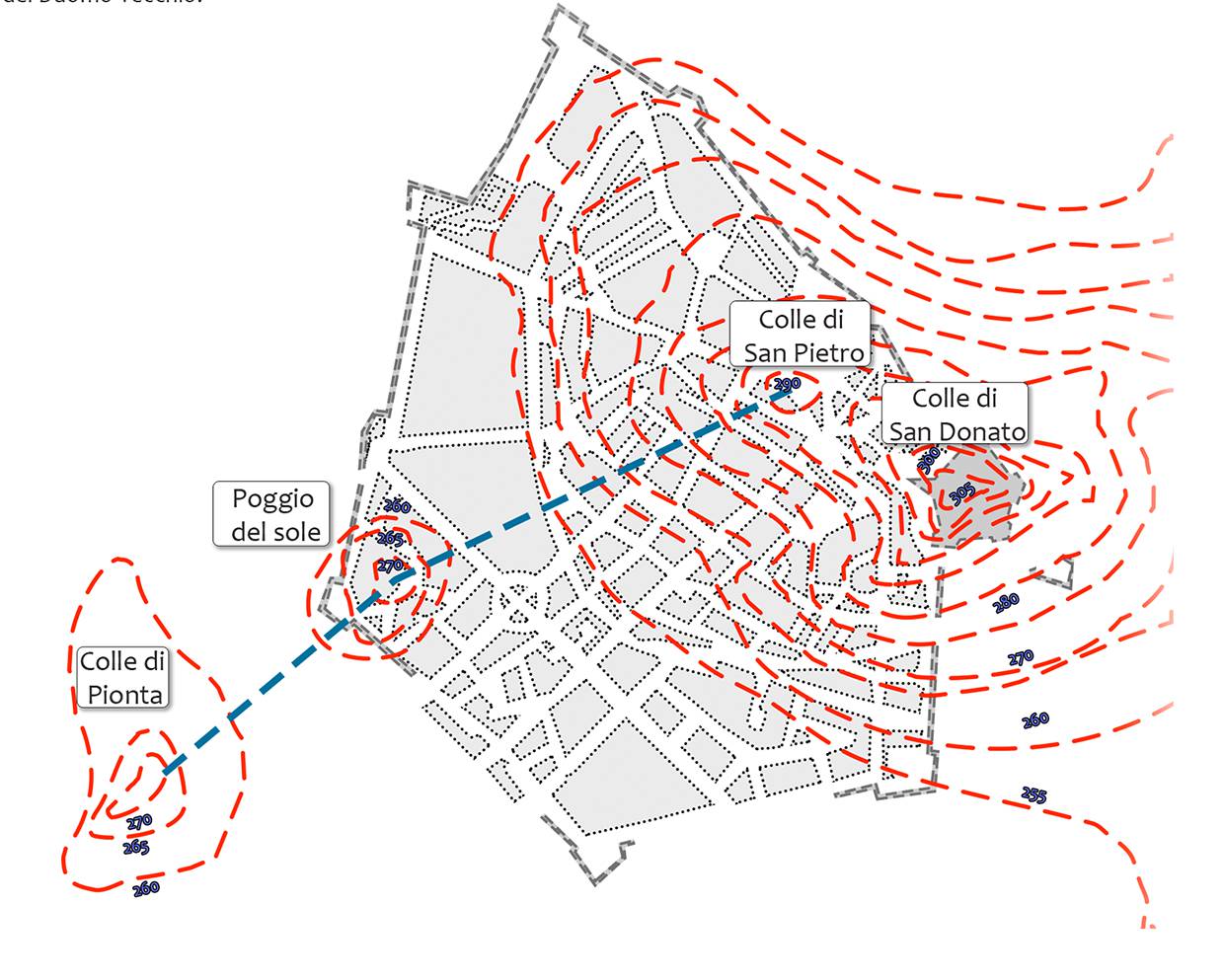 Starting from the 70 to the west of the hill began the construction of the new hospital named after San Donato Arezzo, for this former buildings to the north, with health functions, they have been converted and transformed into local university, reassembling the thread with the history of the area where in 1200 came the first University of Arezzo. 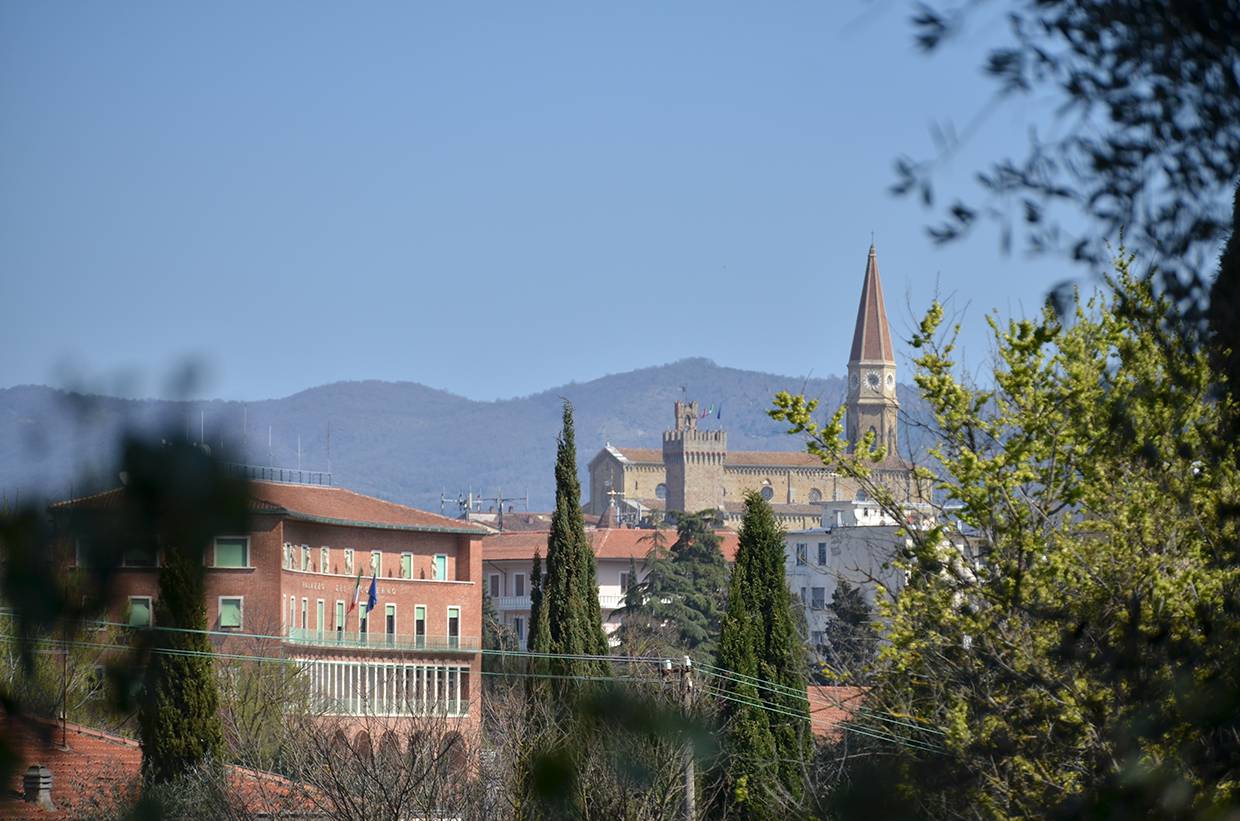 The heart of the Park Pionta has never been transformed in recent decades. Walking through the streets in the inner paved and partly gravel remained, we can sense the solemnity of the place with its gentle ups and downs surrounded by ornamental vegetation with pine and cypress trees and vegetation with a distinctly agricultural abundance of olive trees, without forgetting the little grove of oaks on top of the highest hill. This situation creates wide open spaces and wooded areas that make it suitable for all recreational needs.
From the early years of the 900 ‘in this land full of history they are found the first remains that push in the following years, scholars and enthusiasts interested more and more to the Pionta. In the years that have followed research and archaeological excavations have uncovered five zones including the most important is the area in 1000, where you can see the foundations of the cathedral of Santo Stefano and Santa Maria. This area is the only one we can advance the most plausible hypotheses, and plausible, thanks to the historical evidence and the bibliographical material.
With the hope that the interest in the Pionta will amplify exponentially and is being extended to other areas of her, but we have to see that today this place is present in the eyes of citizens in sharp decline and the archaeological excavations in a constant state of abandonment, girded by a network that does not do honor to the history and beauty of the place. 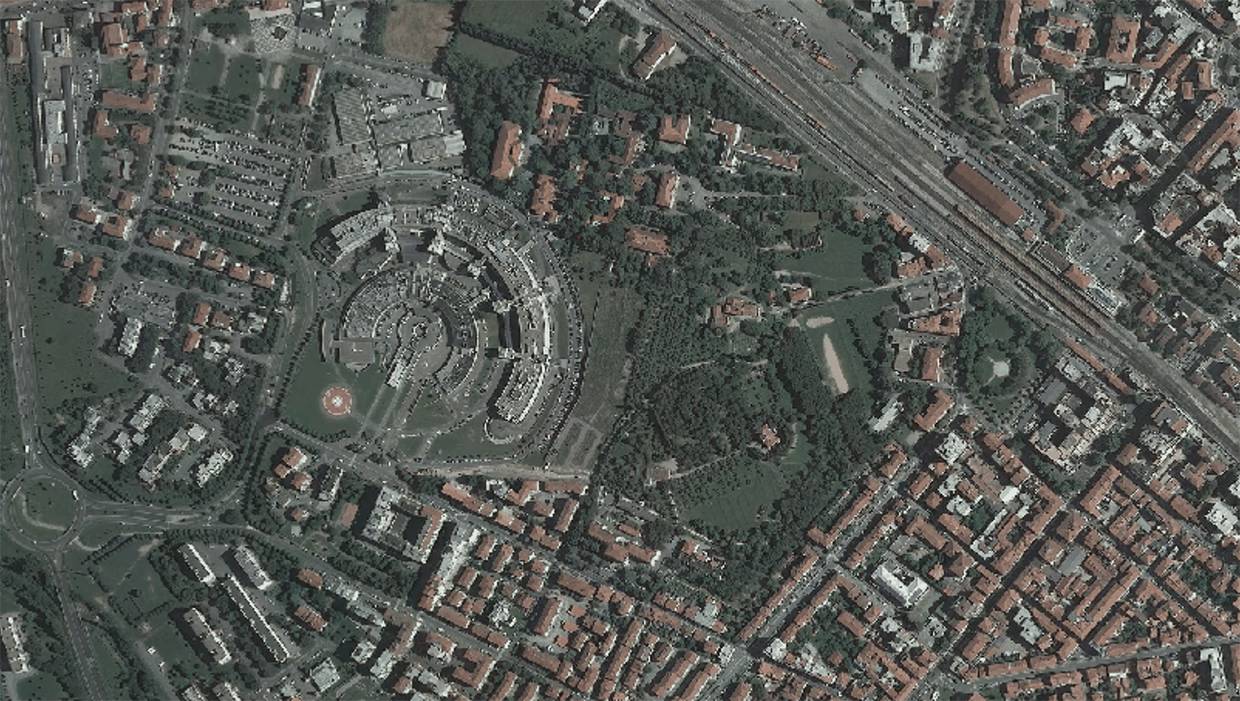 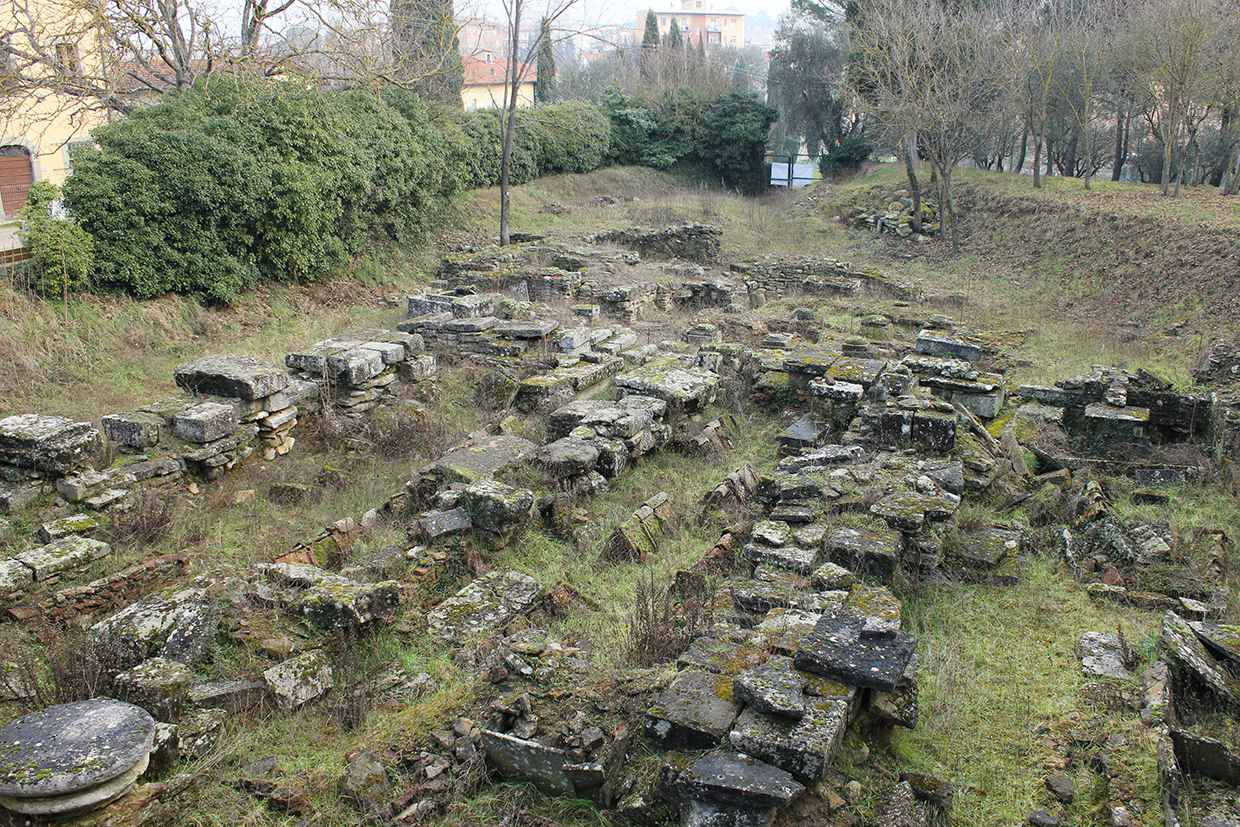