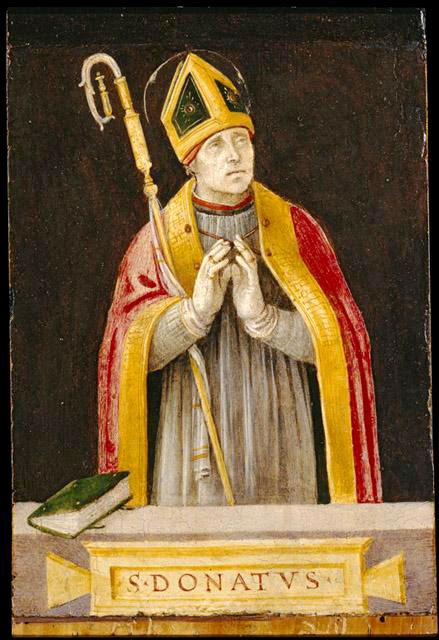 The term cremona, in this case, has nothing to do with the city of the same name, but a name probably derived from pre-Roman Gallic origin, linked to variant pre-Latin “carm” of the term “carra” meaning rock, and the rock of the ordinary pre-Latin suffix -ona [5]. While, the name of Cremona province, derives from its founder Cremone companion of Paris. So, the meanings of the same word, are quite distinct even in the etymological root. News from the life of San Donato can be found in martyrology Geronimiano (dating from the fifth century), in a Passio Donati of the sixth century, in various other Passiones, hagiographies of medieval origin, trust discussed, and in the Chronicle of the keepers, document of the eleventh century . He was probably born in Arezzo but, according to some sources, it may have been a native of Nicomedia or Rome. He became priest and bishop of Arezzo was Satyr. His work of evangelization was very fruitful. Consecrated bishop by the pope, he succeeded in leading the Church Satyr Arezzo and continued his pastoral work, assisted by deacon Antimo. About the dating of his martyrdom there is no doubt. In fact, the day and the month (August 7) ​​they are certified by the martyrology Geronimo, a precious historical document dating back to the first half of the century. V. As for the year was certainly the 304 dc Although some argue that martyrdom took place in 362 AD Historical data in support of this date there are, if not a statement “tendentious” to one of “Passiones” of San Donato to which I refer for further details. Instead, in support of the 304 dc down, of the martyrdom of the saint, there is the only of the persecution that arose sec.IV, the most serious of all, decreed by Diocletian and Maximian Herculean which took place in the fall of up to 303 May 305. E ‘therefore clear that the only 7 / August (date secure Martirologo Gerominiano) can not be that on August 7, 304. The body was buried at Holy Hill Pionta and its successor, the bishop Gelasius (304-325), built on the tomb of the martyr a small oratory “parvum oratorium” (little church), remained revered in the centuries constituting the first church of San Donato.